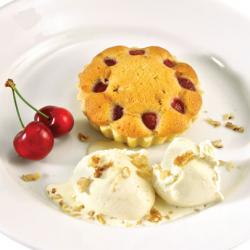 A few chopped walnuts for decoration

4. Roll pastry out and line the flan tins. Spread the jam over the base.

5. Put the butter, sugar, flour, egg and almond essence into a bowl. Beat together until light and creamy. Spoon the mixture on top of the jam.

6. Press the cherries into the sponge mixture and bake for 20 – 25 minutes until golden brown.

7. Beat together the eggs and sugar in a bowl until pale and creamy.

8. Heat the milk in a saucepan and pour onto the egg mixture. Return mixture to the pan, stirring continuously and cook until it thickens. Remove from the heat and leave to cool.

9. Whip the cream to soft peaks and fold into the chilled custard mixture with the vanilla essence.

10. Transfer to an ice cream maker and freeze according to manufacturer’s instructions.

We’d love to keep you updated with our latest news